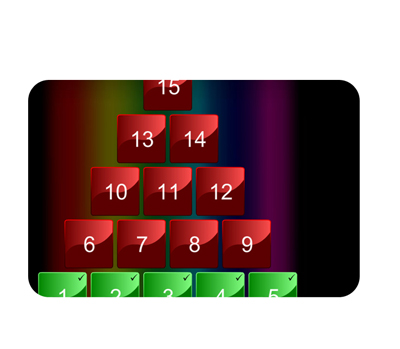 This IWB resource is designed to introduce students to the challenge of completing a Difference Triangle.    If you want to introduce a problem based lesson this resource should save you some planning and preparing time.  This resource can be used to show students the concept on the IWB.  When a student has solved it their answer can be checked by entering it into the resource.  If it all turns green it is correct.  It can also be used for the focus of a group based attempt to solve it.  In the completed triangle each number is the absolute difference of the two below it.  For example 5 is the difference between 4 and 9 and it is the difference between 9 and 4.   In effect it is the higher number minus the lower number.  On this resource a number that is the difference between the two below it will illuminate green.  This does not mean that the numbers are in the correct place.  It only means that the difference is correct.  The bottom numbers are independent of other numbers so will always show green.

This is a problem that requires a lot of work to solve but rewards thinking the problem thr0ugh.  For example the students would do well to realise that some numbers must be at the bottom as no other numbers can have them as a difference.  To move numbers select one that you require moving and then click anothertile which is where you would like it to move to.  They will then switch places.

Your students can work on this using pen and paper, by making tiles that they can move or, one way that you can make this a pick up and go activity is if you use pre-made number cards.  These National Numeracy Strategy Magnetic Numbers 1 to 100 plus +,-,x,÷ and = Key Stage 1

are useful as they can be used in conjunction with a magnetic mini whiteboard so that an accidental sneeze doesn’t lose the work!

To give the students a fighting chance of solving this you may want to give them the top 3 numbers which are 4,9,5.   The solution can be found online or in this book with additional notes: Professor Stewart’s Cabinet of Mathematical Curiosities

As usual comments and bug reports can be entered in the comments.  This site is now also on Twitter and you can comment and question regarding this or any other resource on there by becoming a follower.  Follow this site on Twitter.